I have come to appreciate an intense competitive showdown. I cannot ever remember a fight between two superpowers with either most substantial sales and or market valuations in the retail world. In my view, as Amazon got stronger, they poked the sleeping bear, and that was Walmart. 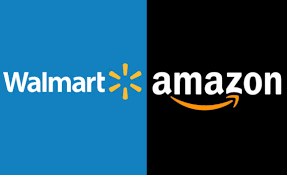 Jeff Bezos and the late Sam Walton shared the same value system by putting the customer first and in charge. They both believed in pushing the limits of innovation. They also were leaders with very high standards for talent and teamwork. Both companies came out of nowhere and became the dominant players in the industry. They both played to a longer-term vision in that they keep improving the value equation for the customer as job one. Walmart and Amazon have a similar value system based on the founder’s vision of success. The message is simply to stay close to the customer and over deliver on your brand promise.

They both want what each other has, which creates the competitive tension between the two management teams. Amazon wants more of a physical presence, and Walmart wants an Amazon-like digital innovation edge. Image if these two companies ever merged!

The reality is that each is making the other better. Walmart has more than enough cash and resources to make real strategic investments in the digital infrastructure. Amazon clearly is focused on platform improvements, Whole Foods, and AWS. In the end, the customer will benefit greatly from the efforts of both companies. Most of the other retailers that are on the sidelines watching these two companies innovate and take share. Today is it worth it for me to shop at both sites for different products as Amazon is not always the cheapest or has the best delivery on specific items.

Retailers have to take notice of both brands, not just Amazon. Walmart will start to use its other newly acquired brands, like Jet, to gain more young customers in urban centers who are educated and have good incomes. The Walmart culture is changing to be more digital in its speed to market, talent equation and strategic risk-taking approach. Amazon is not veering from its original vision and purpose, which starts and ends with the customer experience.

In the final analysis, they will both keep winning. I am a long-term investor in both companies because providing the best value for consumers will never go out of style. As a result of the competition, all retailers will have to improve to keep up with the new standards of service that these two great brands will deliver through constant digital innovation globally.